In this week’s seminar, I will be starting my presentation by giving a brief overview of some of the different forms and functions that virtual exhibits can take, illustrating these with examples. I will also present the highlights of a paper I wrote last semester on the digital affordances used to curate a virtual exhibit while we navigate through the exhibit online. After this, if we have time, I am hoping we can address some theoretical or ethical issue(s) related to virtual exhibits. I am very open to any of your suggestion(s) about what the class discussion should focus on and I am also open to presenting any virtual or visual material that you would like me to include. You can let me know in advance or else surprise me on the spot.

Before I give a brief summary of this week’s readings, I would like to start this blog post with a quote from a book that is not part of our course readings, but that is of great interest and use to me in my inquiry into the parallels between street art and web art, as well as between public space and virtual space. This book was written by one of my Concordia University art history professors who, for her doctoral research, travelled all around the world to document street art and graffiti, interviewing artists to gain insight on the function(s) of these art movements that have garnered increasing recognition by art world institutions and stakeholders. I am deliberately picking a quote, and a context, that is not directly related to the topic of “new media and the museum” to cast a wider net for our class discussions in the hope that you will consider ideas of space, context, and function that go beyond current new media scholarship. 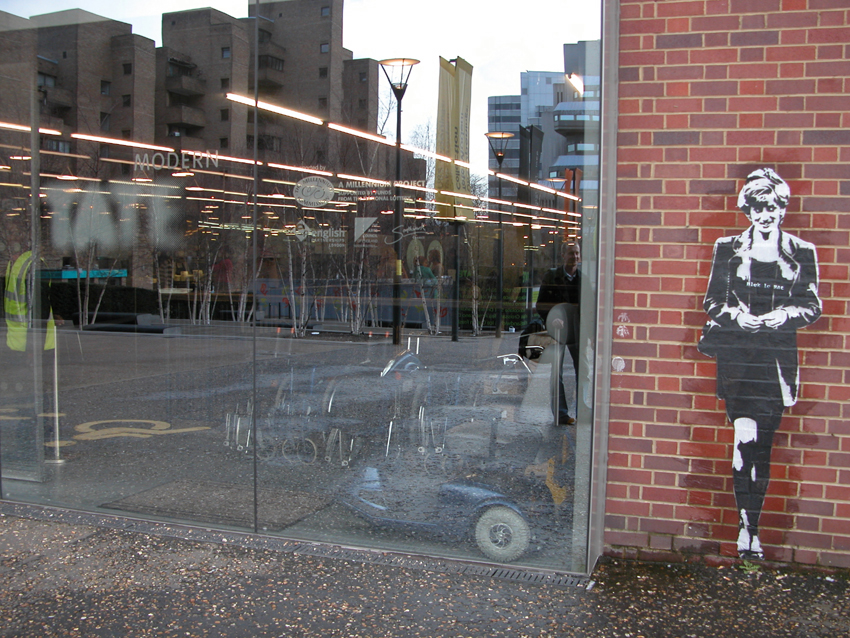 So far our course readings have mostly provided us with a scholarly perspective on art, archives, as well as tangible and intangible cultural heritage in relation to the museum, its institutional discourse, and its relationship(s) to communities of practice that produce cultural artifacts. This seems perfectly reasonable since this is the title, and topic, of our course. However, in discussing virtual exhibits, as an agent provocateur, I felt it was important to draw your attention to two other important players, namely the artists themselves and the curators.

(SR #6)   I found Gansallo’s (2010) article most intriguing in this respect in that it addressed the problematic relationship of both these parties to a well-established high-profile contemporary museum. The author discusses the difficulty of curating web-art embedded in a museum’s institutional website (in this case, the Tate website) when 3 different artists are individually commissioned by the museum itself to create web-art that calls into question how art is viewed (p. 346, para. 1). As curator, Gansallo became the go-between that enabled “the artists [to] have the right to present their ideas and their work without any interference whatsoever from people telling them what art is and what they should and shouldn’t do” (p. 348, para. 5).

(SR #5)   In providing readers with an overview of many of the forms in which tangible and intangible cultural heritage is presented today, this article raises important question with regards to the role of digital technologies in preserving this heritage. Quoting Lowenthal (1994), Silberman (2008) urges us to consider the epistemological and discursive nature of cultural heritage, because, he argues, it may tell us more about the present than about the past: “the more realistic a reconstruction of the past seems, the more it is part of the present” (p. 83, para. 2). Alternatively, he suggests that cultural heritage can also be understood as a means to illuminate how the past has brought us into the present. Finally, he adds that our quest for essence in digital heritage may reflect “an overall understanding of why the Past is so important no less than what it is [sic]” (p. 90, para. 2).

In week #5’s readings, Fiona Cameron (2008) discussed this notion of the “essence” of cultural heritage in the following terms:

“A new way of looking at cultural materials in a digital format and as a model for organizing complex information online is to engage Andre Malraux’s idea of the museal, the museum characteristic of citation (quoted in Bournia 2006). Citation rejects the notion of a permanent pattern of human experience around the idea of art, or indeed heritage. In dissociating cultural materials in digital format from a sense of permanence as heritage, as an expression of their enduring essence, and instead reading objects as citation, opens selection and significance to other values and to the creative interaction between social and cultural systems as complexity” (p. 182, para. 3)

PDQ :   In what way(s) does digital media problematize the “essence” of cultural heritage?

(RR #4)   Comparing the exhibitionary techniques of traditional museums to those of today’s virtual museums, Lewi (2008) describes how the concept of architecture was central to the design of the CD-ROM project titled Visualising the architecture of Federation, a virtual exhibit representing the heritage of Western Australian architecture for Australia’s Centenary of Federation in 2001. She examines how architectural design was the organizing principle used to structure both information and the virtual exhibition space itself, an idea that was conceptually consistent with this project which was intended to celebrate the Western Australian Museum’s “architectural monumentality, its social status as a public space, and as an institution for research and public education” (p. 202, para. 3). Lewi offers a detailed discussion of some of the formal and logistical limitations and problems associated with the creation of a virtual counterpart to the traditional museum, in particular, lamenting the fact that lack of funds has not permitted to make this endeavor accessible on the internet.

PDQ:   What is the relationship of virtual architectural exhibits to the real architectural structure(s) they aim to represent (if we reflect on it in terms of pros and cons)?

(RR #1)   Tracing some of the origins of the virtual museum, Huhtamo (2002), identifies the emergence of exhibition design – a practice pioneered by avant-garde art movements of the early twentieth century – as a key factor that challenged the “relationship between exhibition spaces, exhibits and spectators/visitors” (p. 123, para. 2).  The author also argues that the use of technology has historically led to a redefinition of these relationships which are still in flux today. An example he gives of this is how technology has provided audiences with a channel to bring art, and exhibits, into the home – and this can be as mundane as a series of reproductions on the walls of one’s home to a CD-ROM (pp. 128-129). I was most enchanted by Huhtamo’s essay because in my own view, exhibition design is instrumental in displaying art and cultural heritage. I believe that smoke and mirrors and lots of illusionistic cheap tricks are absolutely necessary in presenting art as they constitute an entry point into new “ways of seeing” and invite viewers to reconsider and rethink what they think they know. Citing Gell (1992), Isaac (2008) has discussed how this can be problematic if we view such strategies as “technologies of enchantment” that cast a spell over us and mystify reality (p. 291. para. 2).

PDQ:   How do the magical tricks of technology enhance or disrupt our experience of art?

(RR #2)   Bandelli (2010) offers some alternative examples of how virtual museums can augment and extend the physical setting of a museum space by proposing to look at what he calls the “social space” that can seamlessly be created between the ‘real’ activities and the ‘virtual’ experiences. To illustrate, he cites two major examples. First, one where students worked on their projects in computer labs located inside a science museum. Second, a virtual exhibit system that provided contextual information on a need-to-know basis. The author argues that in these scenarios, the social space is increased rather than reduced (cf. isolation). The key, he suggests, is to take into account how technology can complement the function(s) of the space in which it is implemented: to “understand social actions in space and time” (p. 152, para. 1).

PDQ:   Can physical space and virtual space be combined to form a new ontological experience that does not serve to isolate the museum visitor?

(RR #3)  Müller’s (2010) article extends a similar argument, except that his concern is with expanding the reach of the museum exhibit rather than enlarging the social space of its audience. Virtual space and physical space, he writes, provide different frames of reference for museum artifacts or collections and it is because of this difference in their discursive function that museums can provide the public with multiple ways to understand what they are seeing (cf. modes of reception). This, he says, is in keeping with the museums’ shift “from object-centered to story-centered exhibitions, while still maintaining the importance of the real object experience” (p. 297, para. 7). Aside from providing several examples of how digital technology can be more or less successfully applied to museum exhibits, Müller suggests seven features that he identifies as “necessary for the development of online exhibitions: space, time, links, storytelling, interactivity, production values, and accessibility” (p. 301, para. 1).

PDQ:   Can you think of other features or medium affordances that could be identified to make the best use of digital technology when designing virtual exhibits or virtual museum space?

Take your pick or let’s do them all. I am looking forward to your contributions and invite you to forcefully push back and debate on issues related to week #7’s readings and presentation. And please feel free to interrupt me as often as you would like during the seminar…as well as demand that I immediately go to a URL of your choice. This week, your wish is my command: Let me be thou’s humble servant in thy seminar.

Week #7: possible themes for class discussion (feel free to add to this or state your preference(s) in class):

Isaac, Gwyneira. (2008). Technology becomes the object: The use of electronic media at the national museum of the American Indian. Journal of material culture 13 (3): 287-310.

10 Responses to Week #7 seminar / When museums go digital: redefining the space of the exhibit