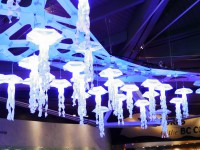 I ventured to the Vancouver Aquarium for my museum visit, specifically looking to see the show “Luminescence: a Celebration of Aquatic Light.” There was only one piece of digital media featured for this show, titled Jelly Swarm. Since it is a work of art, Jelly Swarm, differs from many digital objects in a museum setting. Ostensibly, these new media objects represent a “real” object, helping the audience interpret the represented object through interaction and contextualization. Instead, Jelly Swarm, as a piece of art, would seem to present the audience with an entirely new experience from which to consider the world—at least that is what I expect of an artwork. However, I found my experience with Jelly Swarm did not provide me with a new perspective. It felt flat and, lacking substance, appeared as pure spectacle—which seems to be the aquarium’s strategy for digital media in general. In this review, I will attempt to outline the problematics of this artwork in context of the show and the aquarium, as well as the wider problematic of digital media in museums. 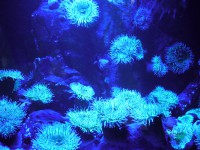 “Luminescence” featured a number of different forms of aquatic light. For instance, fluorescent sea anemones and bioluminescent jelly fish were on display. Fluorescence is when light is absorbed at one wavelength and reflected at a different wavelength. Shown under a blue light, the sea anemones glow vibrantly. Sadly, the jelly fish were shown under normal lighting conditions, which prevents visitors from seeing their luminesce. In bioluminescence, unlike fluorescence, light is actually produced by the creature. It requires very dim lighting conditions to be seen, by humans 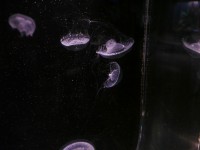 at least. Perhaps it is for this reason that the aquarium chose to commission Jelly Swarm: as a way to simulate the bioluminescence of certain kinds of jelly fish.

A collaboration between Joseph Wu and Tangible Intervention, Jelly Swarm consisted of 94 origami jelly fish lanterns. Each origami sculpture was about thirty inches in length, and roughly eighteen inches in diameter at the widest point. Each sculpture was programmed to independently interact with its neighboring sculptures to create “generative luminescent displays” (Tangible Intervention). Together, they created 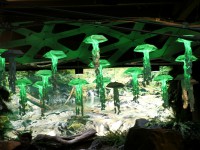 wavelike patterns of color that moved from one end of the semi-circular installation to the other and back, each wave a different color. Installed in the heavily trafficked foyer of the aquarium, the installation drew looks from passersby, and most people stopped to look at the installation. The light show could hold up to the din of raucous children and a heavy flow of visitors—activity which could easily overpower many art installations. However, most people watched for just a 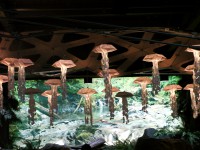 few moments, and continued on with their visit. They did stop to consider the installation, certainly not the way they considered the living creatures around the installation.

There was also a small touch screen, off to one side, that allowed visitors to interact with the sculptures. On the screen, an array of circles were laid out to match the installation. Tangible Intervention writes, “In the natural world, bioluminescent jellies glow when they’re disturbed. Jelly Swarm imitates that natural, reactive behaviour by allowing Aquarium visitors to surprise the origami jellies into creating beautiful patterns of colour and light. Move a hand across the interface on a plinth mounted touch screen, and the jellies respond” (Tangible Intervention). Unfortunately, this was not my experience. 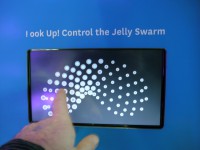 Touching the interface, I expected the circles to respond, providing feedback that my touch was registered by the system. However as I tapped circles and swiped my finger over the display, nothing happened on the touch screen, nor up above. I noticed other visitors at the museum also struggling to determine if their tapping of the screen had any effect on the sculptures, which it did not seem to.  This may have been a malfunction, or the interaction design may have been too subtle. Either way it did not work in the sense that multiple people were unsure of what was happening. The interaction, even if working perfectly, seems misguided.  Looking down to tap a screen to manipulate visual aspects of something hanging from the ceiling is a bad form factor. More concerning is that the connection between the interaction and luminescing jelly fish—a response to their environment when physically jostled—was unclear. Perhaps this is just the difficulty of presenting art in the context of the aquarium.

Simon O’Sullivan, paraphrasing Gilles Deleuze, states that art “expresses a particular and different world-view…Art allows us access to other worlds, allows us to experience another’s world that would otherwise remain closed to us” (121-122). The material configurations of the artwork offer the viewer something that otherwise does not exist—electronic jelly fish that coordinate luminescence through an intricate system of call and response, for instance. Arguably, the entire aquarium (and many museums) offers an experience of other, closed, worlds. This is exactly what challenges Jelly Swarm. The stiffness of the paper and the electronic lights do not compare to the ethereal 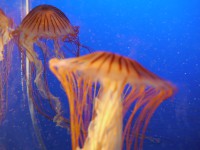 undulations of jelly fish and the eery glow of fluorescent sea anemones.  Perhaps it is a material choice, or more likely, the juxtaposition to living creatures that make Jelly Swarm seem forced. Lacking the organicity of its surroundings, it did not compel me to fully experience the world it offered. Which begs the question, why put art in the aquarium at all?

Gwyneira Isaac writing about the National Museum of the American Indian (NMAI) states, “electronic media not only enchant the viewer, they conversely situate him or her with in an institutionalized atmosphere—a reading that reveals parallels with the designers’ desire to use technology as a means of crowd control” (301). She could have been writing about Jelly Swarm. Positioned just beyond the entrance to the aquarium, the installation beckoned visitors into the museum, offering a spectacle of flashing lights it maintained the flow of bodies, but not much else. Isaac’s consideration of new media in museums is from an anthropological perspective. She is concerned with the ways that media shape our understanding of different cultures. She identifies an existing gap between new media theory and postcolonial theory, one that “needs to be bridged in order to fully understand the ideological complexities presented by NMAI and its [new media] exhibits” (305). I think that the same can be said about the use of digital media at the aquarium. The aquarium is an environmental organization, focusing on public outreach and education. The display of aquatic life seeks to educate the public broadly about human relationships to sea creatures, their environments, and the effects of human actions on those environments and life forms. Jelly Swarm has little to say about such relationships. It is little more than spectacle, which I would argue is the Vancouver Aquarium’s strategy for new media objects..

The best example of new media spectacle at the aquarium is the Cinema 4D experience, where 3D films are ‘enhanced’ by the campy effects of smells, spraying water, haptic seats that buzz and poke the viewers—provoking squeals of delight and surprise from the audience. The experience is pure spectacle and contains little substance—a strategy that seems inconsistent with the mission of education. However, this does not mean that spectacle is incapable of provoking relational considerations between humans and sea creatures. One piece in “Luminescence” did just that.

The aquarium powered their Christmas tree lights by harnessing energy from electric eels. Spectacle? Certainly, yet it still offers an interesting world otherwise unavailable to us.  The weird hybrid of technology and eel not only displays different forms of life, it also offers an environmental critique of traditional Christmas lights. The juxtaposition of creature and technology makes for a new world. Sadly, this installation had been taken down by the time I visited the aquarium, so I cannot say for certain that it provoked such environmental and other worldly considerations in a compelling way. However, this kind of vital connection between technology and life is what I believe the aquarium should strive for when integrating digital media.

It may seem as if I am too harsh a judge of Jelly Swarm, after all the prime demographic of the aquarium is children, and there is little harm in entertaining programming. There is even a practical reason to mimic the luminescence of jelly fish which is otherwise difficult to see. On the other hand, this organization is committed to the environment and public education, thus the use of digital media, and art, as merely spectacle seems a lost opportunity to strengthen the relations between humans and the environment—an opportunity to provide novel perspectives from which to consider our world and understand it in new ways.

Isaac, G. 2008. “Technology Becomes the Object: The Use of Electronic Media at the National Museum of the American Indian. Journal of Material Culture 13(3), pp. 287-310