Screen shot from opening of A Thread That Never Breaks, AbTec Gallery, 2021.

Jaad Kuujus (Meghann O’Brien) is one of the seven incredible artists featured in the exhibition A Thread That Never Breaks, as a part of Indigenous Fashion Week, Toronto. Curators Lisa Myers and Sage Paul originally intended to install the works in a physical gallery, but Covid-19 restrictions meant that they had to rethink their approach. They reached out to AbTec (Aboriginal Territories in Cyberspace) and artist Skawennati and the team at AbTec to see if a collaboration with AbTec Gallery in Second Life could be a way forward for the exhibition.  A Thread That Never Breaks was “transmediated” in Virtual Space at AbTec Gallery.

“Artist Meghann O’Brien has described her woven textiles and baskets as threads that connect to ancestral knowledge. Visualizing the strong connections between generations as the literal threads in garments inspired A Thread That Never Breaks, an art exhibition that brings together artworks by seven Indigenous artists, Angel Aubichon, Joi T. Arcand, Leanna Marshall, Caroline Monnet, Meghann O’Brien, Olivia Whetung and the Pacific Sisters. Originally scheduled to open Spring 2020, the exhibition had to adapt with the dramatic change to our lived realities. Transmediation is the term for bringing an artwork from one medium to another. In A Thread That Never Breaks, the works have been transmediated from physical threads into pixels, polygons and lines of code that you can experience through your avatar. As it was for our ancestors before us, traditional knowledge and traditional cultural expression become tools of resilience and survival.’ – Lisa Myers and Sage Paul, Curators

Kate Hennessy, Hannah Turner, Reese Muntean, and Conrad Sly are excited to have collaborated with Jaad Kuujus in the creation of Wrapped in the Cloud, a digital represention of her woven artwork, Sky Blanket. Wrapped in the Cloud was created so that it could replace the original Sky Blanket in the exhibition Boarder X, curated by Jaimie Isaac, and return home for use in ceremony. It has since toured to a number of major galleries across Canada with Boarder X, and was a part of Soveriegn Intimaces at Plug In ICA in Winnipeg. We were also thrilled to support the transmediation of a new woven artwork for installation, “Everyone Says I Look Like My Mother” and the installation the works in Second Life.

Sky Blanket conveys the transcendental experience of an artist opening herself to an animal (or plant) as a teacher through a focused concentration that is similar to other meditative practices. Traditional Haida iconography is distinctive in representing the head in a larger format than the rest of the body. Here the central field is decorated with three single ancestor faces, thereby reinforcing the vital essence of being. The three faces represent: “the past, present, and future; ancestors, their living descendants, and those yet to be born; three sisters; heaven, earth, human; ocean, earth, sky; my three teachers: Sherri, Kerri, Willie. Lines of the faces are bones of the ancestors, or the skeleton of an art form.” They are placed as if floating in space, connected to each other. Their connectedness “represents the sharing of knowledge through art”, and expresses a world view rather than a crest. Containers of forces of power and energy, the faces emerge from the center of the robe with meaning much greater than themselves. They are a mere skeleton of form in a dual landscape of black and white, positive and negative space, split by the Raven’s Tail lightning pattern of the interface. The red paint on the wall represents the “vertical T of the copper”, a traditional face paint used in Meghann’s Haida clan. The red hallway extending back is meant to represent her bloodline and a journey back through lineage and time.

Jaad Kujuus, Everyone Says I Look Like My Mother (2020). Screen shot from A Thread That Never Breaks, AbTec Gallery, 2021.

People have told me all my life “Yaawwww you look like your mom!”  She’s told me a few times that even though she never wove, my skill for weaving is something she gave me. To me this is the thread that can never be broken, those pieces of ourselves we are free to rediscover or connect with or dig deeper into to discover. Envisioned as a corollary project to Sky Blanket back when I spent a year working with mountain goat wool, Everyone Says I Look Like My Mother started as just a T-shirt and has evolved into an installation that considers the material and  matrilineal origins of artistic practices like spinning and weaving in contrast to how commercially made garments are made. In the context of Sky Blanket it considers what makes an item of value: form, or material?

This work exists as a meditation to reflect on how objects come into being and the impact they may have for how our descendants understand the world. As a people today we are disconnected from the spirit of function and power of materials. I like to consider the interplay of these ideas and how indigenous ways of knowing are colliding on the surface of commercialism in a fashion context. Maybe for the first time they are meeting, creating a space that is both past and future, like distant relatives of each other that somehow got to meet.

Jaad Kujuus, Everyone Says I Look Like My Mother (2020). Screen shot from the opening of A Thread That Never Breaks, AbTec Gallery, 2021. 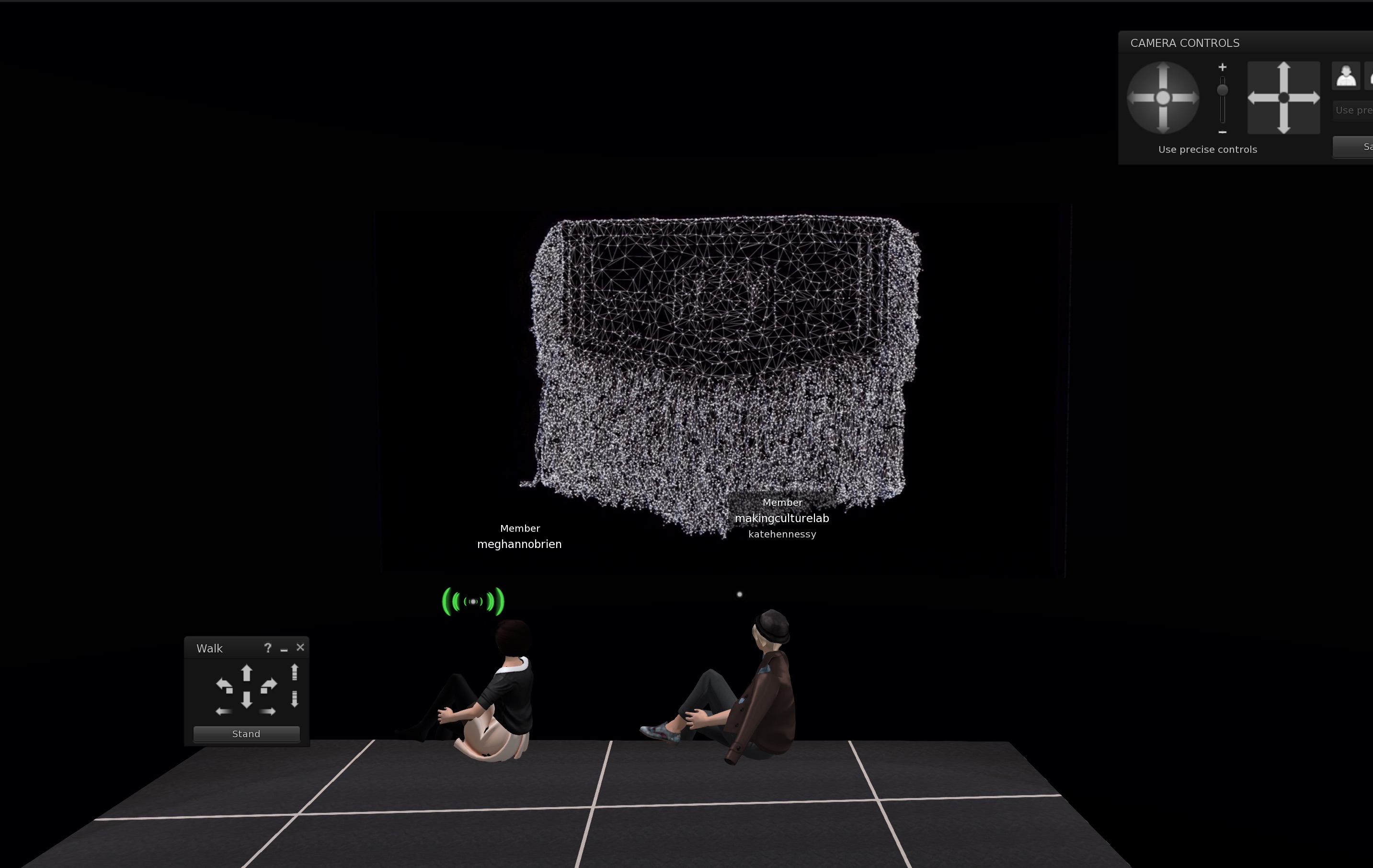 Jaad Kujuus, Wrapped in the Cloud (2018). Screen shot from A Thread That Never Breaks, AbTec Gallery, 2021.

Wrapped in the Cloud arose out of a meaningful collaborative process, the aim of which was to create a digital replica of Sky Blanket so the original could be returned for use in ceremony. Captured by photogrammetry and digitally stitched together, this animated version of the original confronts the limits of technologies and media to represent material belongings. Moving through representations of the digital replication processes that share linguistic similarities with Meghann’s traditional weaving practice, the piece highlights the complex metaphorical intersections of weather patterns and the cycles of water, technical artistry, networked cloud-based software, and the ethics of return. It works in gallery spaces to immerse the viewer in the feelings and meanings evoked by the original blanket and expand on them with its digital representation. The piece evokes Sky Blanket’s connections to Haida and Kwakwaka’wakw stories and stars, and the possibilities for the digital to support the reconnection of belongings from galleries and museums to dynamic cultural practice.