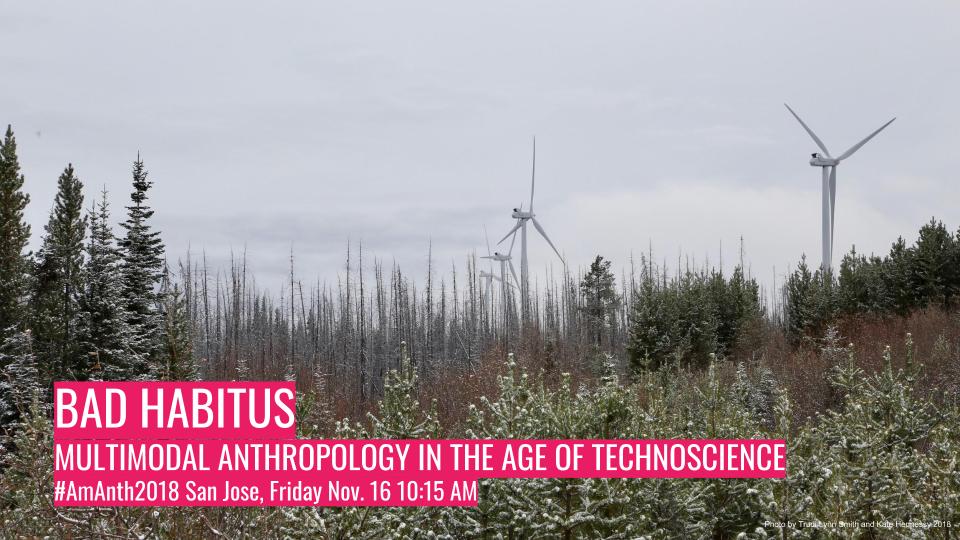 Please join our conversation in San Jose at the Meetings of the American Anthropological Association on November 16 10:15 am-12 noon (4-0335.).

Bad Habitus: Anthropology in the Age of the Multimodal Roundtable Session

How is multimodal anthropology complicit in the reification of technocentric methodologies and power? Inspired by Elizabeth Chin’s provocation for the multimodal to “expand beyond Eurocentric, colonialist, and ableist ways of doing what we do, with or without technology” (Chin 2017: 541), this panel asks how the multimodal in anthropology could and should continue to trouble and disturb the discipline while resisting the enchantment of the new.

The recent transformation of the Visual Anthropology section in the journal American Anthropologist into Multimodal Anthropology was motivated by three perceived developments in the world of anthropology: A democratization and integration of media production, a shift toward engagement and collaboration in anthropological research, and the “dynamic roles of anthropologists vis-a-vis both the profession and the communities in which they work” (Collins, Durington and Gill, 2017). Multimodal methodologies and frameworks hold the potential to expose and disrupt deeply embedded knowledge hierarchies while also opening up ways of knowing otherwise. However, although it may challenge dominant paradigms of authorship, expertise, capacity, and language, there is nothing inherently liberatory about multimodal approaches in anthropology.

Building on Sara Ahmed’s (2007) concept of bad habits and Pierre Bourdieu’s (1988) habitus, we identify that multimodal anthropologies run the risk of reproducing and reinforcing a problem of bad habitus. Multimodal anthropologies can just as easily reinforce existing power structures by making recourse to techno-fetishism or by dressing up neocolonial practices of extraction, inclusion, and appropriation in new language. Mobilizing the multimodal in the service of anthropology we must bear in mind its position vis-à-vis global capitalism and the reproduction of social forces that continue to reinforce cultural imperialism, neo-colonialism, and oppression. We wonder what multimodal approaches to knowledge production privilege and what do they strategically deny?

Presenters in this session envision the multimodal and its potential to support the realignment of relations of power, community-led media productions, and ethical research relationships with communities that have been excluded from participation in anthropological forms of knowledge production. This roundtable begins by asking: How do technologies work, how are they produced, by whom, and under what conditions? Can multimodal anthropology address technological democracy in an era where it is largely agreed that the internet has failed to increase or produce democratic conditions? What might multimodal anthropology fail to recognize? Or worse, how might our own attention to technological forms, subsequently elide issues of power, resource equity, and representation?