“Because We Are Yong” (2011) Produced in collaboration with Wat Pratupa, Lamphun, Thailand.

The Intangible Cultural Heritage and Museums Field School is an intensive, 2-week course offering a combination of lectures and a hands-on field practicum. Participants–heritage professionals and students from the Mekong Delta region––work in cross-cultural, interdisciplinary teams to apply their newly gained concepts and approaches to safeguarding intangible heritage via the museum. This year I worked with Sirindhorn Anthropology Centre staff to develop a field practicum focused on the documentation of intangible heritage using digital technologies (documentary photography, sound and video recording). Following an introductory training to documentary video techniques and production (something I was first introduced to as a student and later as a teacher at the awesome Gulf Islands Film and Television School), Field School participants worked in close collaboration with four participating  communities in Lamphun Province to produce a short film featuring one element of intangible cultural heritage as part of their practicum (for more information and source see the SAC Field School website). 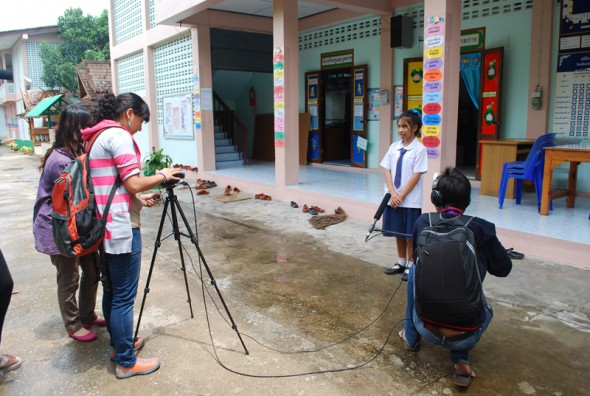 Filming "Because We Are Yong" at the Wat Pratupa school.

Here are the four short videos that we produced this year. I worked directly with a team at Wat Pratupa, where we focused on the issue of the endangered northern Yong dialect. Our film “Because We Are Yong” (above) was produced in close collaboration with the Wat Pratupa Assistant Abbott Patiphan Phangwana (check out his fantastic website about local culture and the Pratupa community here). The four teams were comprised primarily of first time video makers, and the entire production–from storyboarding to shoooting to editing to community reviews and screenings–in five days–not bad!! I want to send my sincere thanks to SAC Director Suvanna Kriengkraipetch, Paritta Chelermpow Koanantakool, Alexandra Denes, Peter Davis, Marilena Alizivatou, Rasmi Shoocongdej, Michelle Stefano and the SAC staff for supporting this new element of multimedia production of the field school. My special thanks to recent SIAT grad Majid Bagheri, Vu Phu’o’ng Nga from the Vietnam Museum of Ethnology, Zhang Hai from Yunnan University, and Appinan Thammasena from the Sirindhorn Anthropology Centre for their inspiring work as video production mentors in each of the groups. I hope that you enjoy the videos!