Reese Muntean, a PhD student in Interactive Arts and Technology, received a Graduate International Research Travel Award (GIRTA) to further her research in Thailand. Her report:

For my doctoral research, I have been investigating how we communicate and embed values, including cultural and Indigenous values, into technology. As part of this research, I have been working with the Yong community in Lamphun, Thailand and Thailand-based researchers to see how 360° video and drone documentation might be used in cultural safeguarding practices. 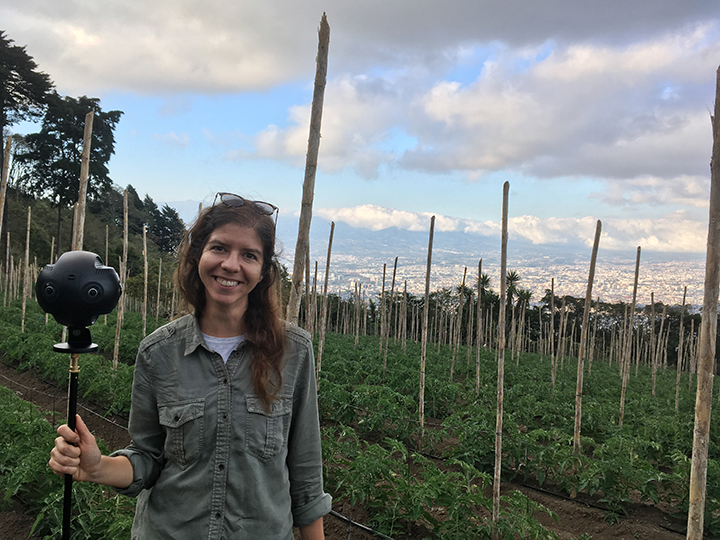 My senior supervisor had been working with the Yong community along with a faculty member from Chiang Mai University and other researchers as part of an anthropology field school, focusing on the safeguarding of the Yong minority’s intangible cultural heritage and traditions around their Buddhist Salak Yom festival. Held every year in the tenth month of the lunar calendar, community members construct colorful, towering bamboo structures covered in necessities for monks. These structures are offerings that, along with smaller basket-sized offerings, are distributed to the monks in a lottery system. Each year the main festival is held at Wat Prathat Haripunchai, with local festivals held on different dates at temples around the area.

In 2016 I received a grant from the Society for Visual Anthropology to conduct the first portion of my research in Lamphun, Thailand. My own research contributed to existing work by exploring how 360° video and drone documentation might be used in the ongoing efforts to document and safeguard this festival. While the initial research grant enabled me to document the preparations and festival in 2016, I had not been able to return to the community with my research partners to hear the community’s thoughts and reactions, as well as how they envision these new forms of documentation will be included in their plans for a community archive and website.

The Graduate International Research Travel Award (GIRTA) allowed me to return to Lamphun to participate in festival preparations, attend the festival, and show the 360° video and drone footage to the community. I conducted interviews with community members, monks, and local officials about their thoughts on the footage, examining how this documentation can best be incorporated into the community’s website that is currently under development. The community response to the videos was enthusiastic, and we are planning the next steps of the project, which may include filming an educational 360° video with the youth in the Yong community. I am grateful for the GIRTA and the invaluable opportunity to return to Lamphun to continue my work with community members and research partners.