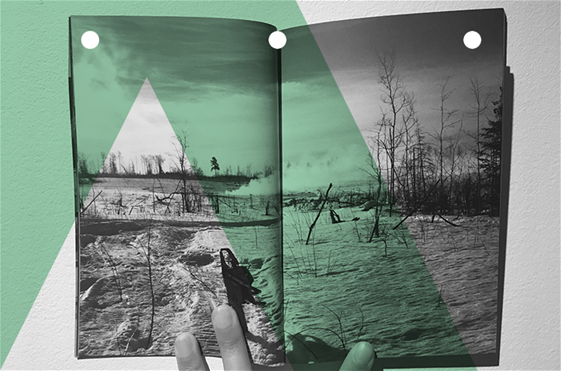 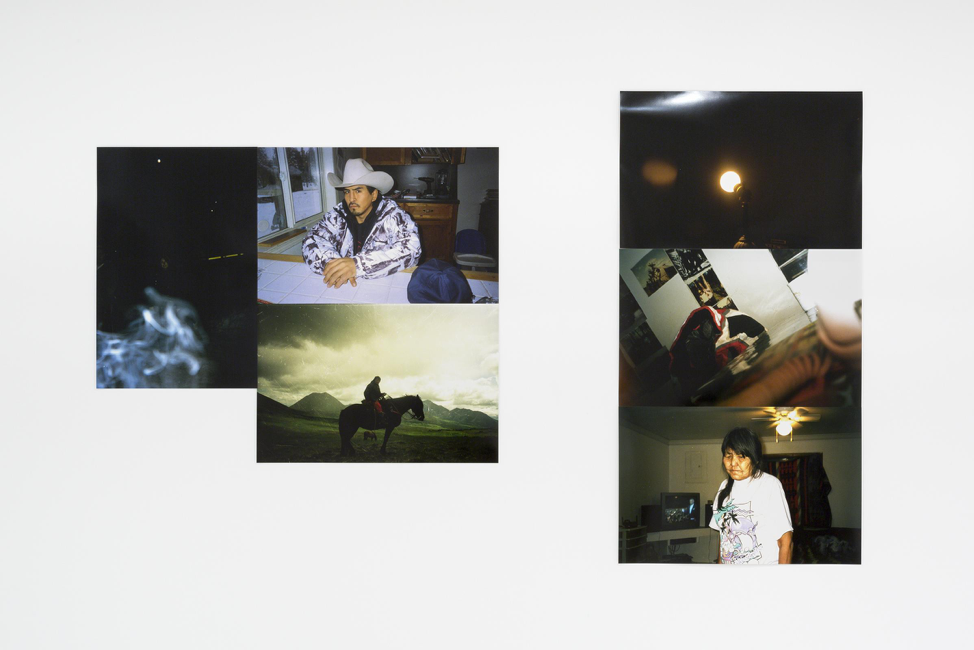 We were excited to read Barbara Matthews’ thoughtful review of Review of $5 Handshake: Art on Treaty 8 Territory, the book that accompanied the exhibition Maps and Dreams, curated by Melanie O’Brian and Brian Jungen, at the Audain Gallery (June 1 – July 29, 2017).

A taxidermied moose head hung above an office desk. A chainsaw sticking out of the snow on a clear winter day.  A denim jacket with painted letters that spell COWBOYS GOT MORE FREEDOM. A fireman resting on the earth. Two bodies cocooned side by side in a trailer.

These tableaus are the subjects of 35mm photographs taken by Dane-zaa artist Jack Askoty who lives on the Doig River First Nation north of Fort St. John, BC. They are some of the images that open the fourth publication in SFU Galleries’ Critical Reader Series, titled $5 Handshake: Art on Treaty 8 Territory, a corollary book to the group exhibition Maps and Dreams, curated by Brian Jungen and Melanie O’Brian (Audain Gallery, June 1 – July 29, 2017). Askoty’s personal photographs capture aspects of traditional life, like hunting, but also the aspects of modernity that have influenced the territory, a place deeply affected by settler-colonialism.

$5 Handshake offers a polyphonic image of Treaty 8 territory through an attempt to unravel and unflatten the colonial makings of “territory.” The Critical Reader features conversations, essays and commissioned texts by Jungen and O’Brian, Brenda Draney, Kate Hennessy, and Candice Hopkins, as well as a reprint from Hugh Brody’s anthropological study Maps and Dreams (1981), which informed Jungen and O’Brian’s curatorial collaboration. Together these texts expand upon the exhibition by evoking the historical context, politics, reflections, and feelings towards the territory. It is quickly revealed that there are intimate relationships, mutual influences, familial and platonic bonds between the artists in the exhibition, the curators and the authors. Together these voices raise important questions concerning land usage, production of knowledge(s), ethnographic refusal, and making visible the invisible. 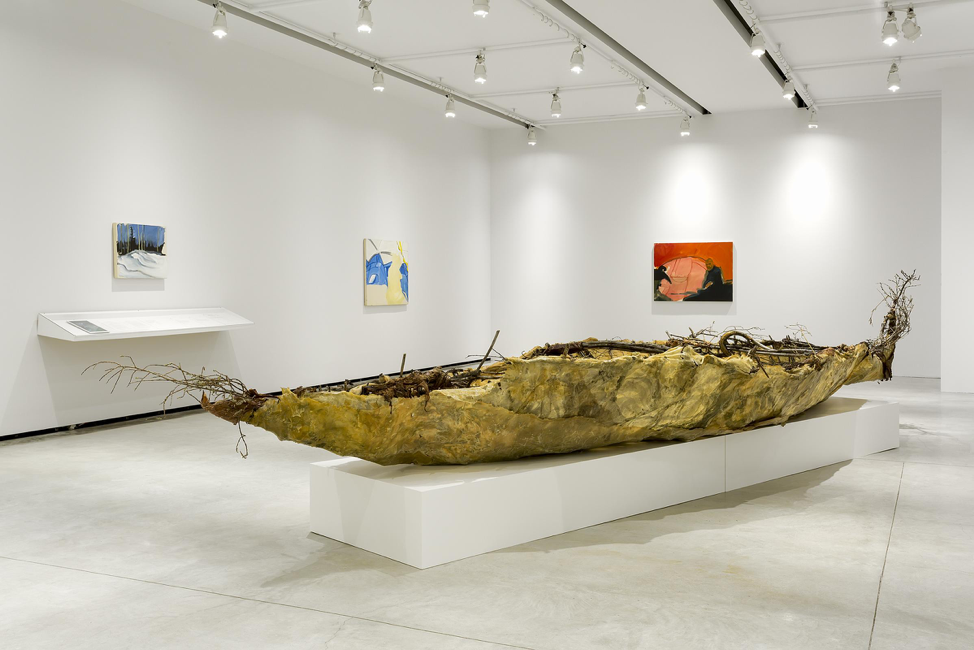 In the conversation between the curators, Jungen states that, “the Peace Country has been pimped out by government and sold to industry since the 1950s with very little consideration for Indigenous rights.”1 Undoubtedly, an impetus for the exhibition at this time was, in part, to bring to light some of the implications of the Site C Dam, which will have a devastating impact on the Peace River and surrounding region. In this regard, the book not only aims to make visible the resource extraction taking place in Northern Canada, particularly Treaty 8 – which has been mapped out for extractive purposes since the days of the Klondike Gold Rush – but also brings forward the diverse array of perspectives and voices on issues that are rarely heard from in Vancouver.

How can one come to know a place that has been possess by a colonial state? Cree artist Brenda Draney brings up the discomfort of knowing and not knowing in her short personal account of an artist residency in the text, “Every Territory is an Island.” Her points of inquiry are vital. She asks herself seriously, “How much do you relate to this place?” in reference to her stay on Fogo Island in Newfoundland, and to the much broader context of one’s relationship to a place, as either a visitor, tourist or citizen.2 Her writing on Fogo Island is useful for understanding points of contention in relationality: how one can be from a place but not know it, and how is dispossession felt in our contemporary lives?

Candice Hopkins, a writer, researcher and curator from the Yukon, first encountered the 1899 Treaty 8 map while working as an archivist at the Treaty 8 Tribal Association in Fort St. John after completing her BFA. In her essay, Hopkins traces the historical context of Treaty 8 maps and how early federal government maps revealed the bias of colonial perspectives. They essentially crossed out and erased names that had been present in oral vernacular for centuries. Hopkins says that the colonial maps reveal an “extraordinary lack of knowledge” about the land.3 This raises many questions about map-makers, why lines were drawn, and how they restructured the lives of Indigenous people. How was knowledge about a territory so large (a region covering three provinces and bigger than France) canonized in the nation-state’s visual landscape? How did it manage to erase so much in the process? 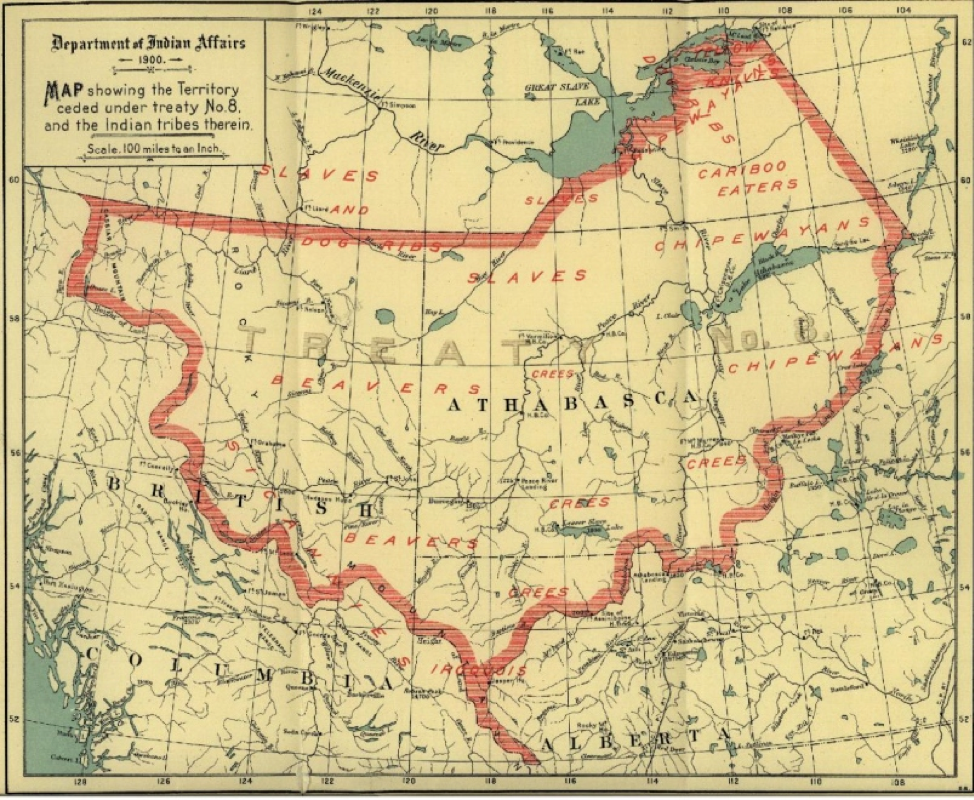 Federal Government of Canada Map of Treaty 8 under the Department of Indian Affairs, 1900. Courtesy of Treaty 8 Tribal Association.

Not only has Canada’s landscape been profoundly structured by settler-colonial maps but also by the disciplines of anthropology and visual anthropology. Robert Flaherty’s Nanook of the North (1992) and Tony Ianzelo and Boyce Richardson’s Cree Hunters of Mistassini (1974) are among the many visual ethnographies and films that have upheld Western, colonial belief systems, while reducing or erasing Indigenous ones. $5 Handshake refuses an authoritative method of representation. Instead, it raises questions of authority and knowledge production, especially in response to Brody’s book, a study and defense of the traditional hunting, trapping and fishing economies of the Dane-zaa, that spoke to generations of Canadians interested in what Northern BC is like. 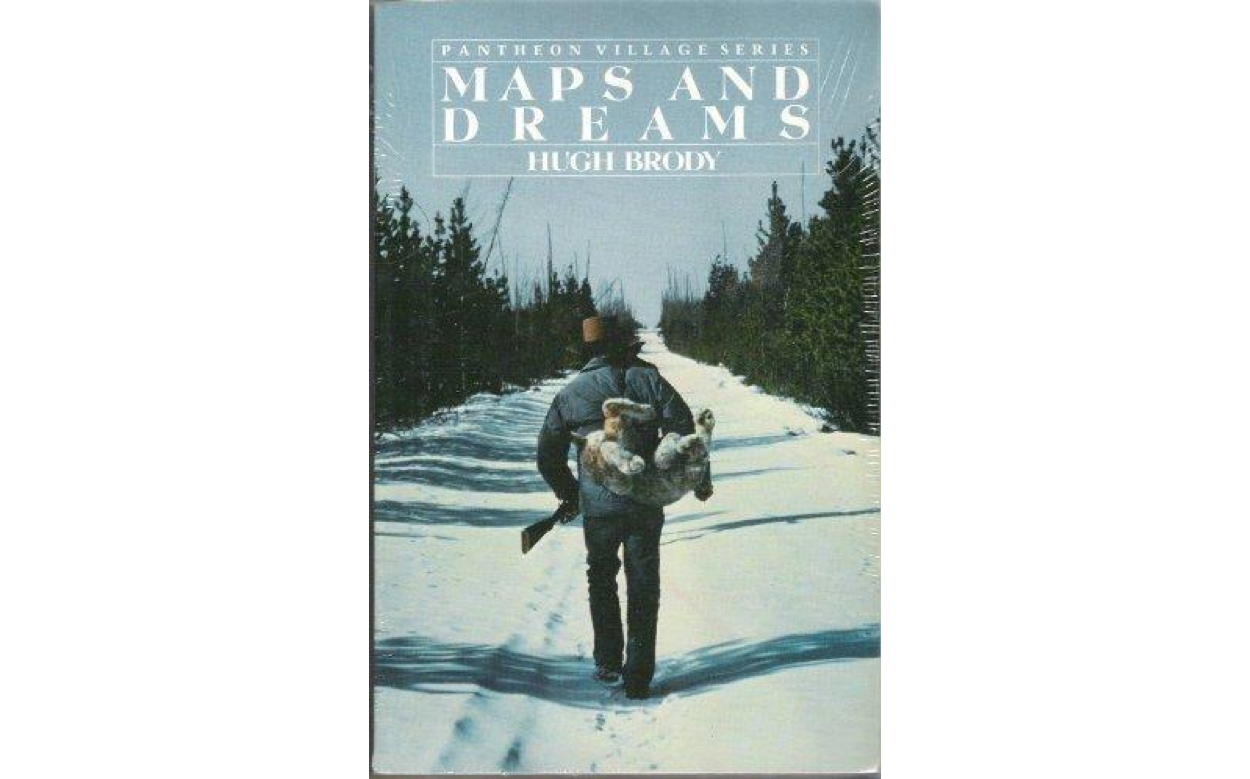 As Jungen mentions, Brody’s ethnography was pivotal to his understanding of Dane-zaa culture and became a critical source of knowledge to draw from, since growing up in essentially foster care and later living in an urban environment had disconnected him from his own cultural histories. (Jungen’s uncle, the aforementioned Jack Askoty, had developed a relationship with Brody during his anthropological research in Doig River Reserve in the early eighties.) It was on a visit to Fort St. John in the summer of 1989 that Jungen was able to forge a bond with his uncle and spend time hunting and trapping in the bush. These exchanges were key to considering the dualities of the region and what it means to be a contemporary artist from Treaty 8 territory.

Cultural anthropologist Kate Hennessy reflects on her position as a digital archivist working with the Doig River First Nation in 2005 in her text, “Voices and the Archive in Maps and Dreams.” Hennessy argues that while Brody’s voice interprets from an external, authoritative position, the artworks in the exhibition do the exact opposite.4 Hennessy stirs up many questions regarding the authority of Brody’s book, referencing Audra Simpsons’ notion of ethnographic refusal, in which Indigenous people refuse to be archived in ethnography and resist the ways knowledge circulates within a colonial state, articulating a reversal of power.

In Askoty’s photographs, there is a kind of ethnographic refusal at work in the images he takes on disposable cameras. The sequence of images is striking and segue into broader discussions about how we look at territory. Askoty’s photographs make life on the Doig Reserve visible without anthropologically reconstructing it. They reverse the gaze on which stolen Indigenous land is interpreted, written, documented, archived, and circulated. Askoty recovers Dane-zaa heritage by capturing it with his own lens, interrogating the image-making that happens under colonialism and the harm it inflicts on Indigenous sovereignty.

At the heart of this book is the thread that connects the different writers, contributors and voices together – the way in which friendships, families and artists have impacted their relationship to this place, its dualities and contradictions. Like Askoty’s photographs, the contributions to the book de-territorialize constructed notions of Northern BC by showing a dual relationship to land and territory, the ancestral and the contemporary, a place where hunting remains fundamental to life yet deeply fraught within debates over the current legal status of ancestral ways of living. $5 Handshake is purposefully cautious in offering a consistent representation or interpretation of Treaty 8 territory. In many ways, the Critical Reader successfully addresses the tensions in our contemporary landscape by pushing us to favor the multivalent over the authoritative. The book is a gesture towards Indigenous sovereignty, by allowing those voices from within to speak and write about it personally.

For more information about Maps and Dreams, click here.