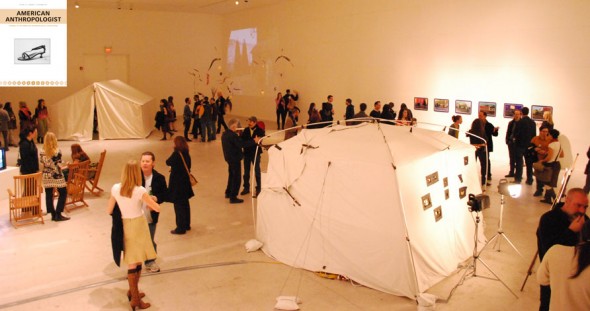 An extended review of Ethnographic Terminalia by Shelly Errington (UC Santa Cruz) has just been published in the journal American Anthropologist. The review addresses our first three years of exhibition (Philadelphia, New Orleans, and Montréal) and traces theoretical and methodological connections to broader movements in anthropology and contemporary art. The full article can be downloaded on the Ethnographic Terminalia website here.

An excerpt from the review:

“Forty or 50 years ago, any anthology or book with the words “anthropology” and “art” prominent in its title was almost certainly devoted to anthropological theorizing about the works of formerly colonized peoples. No more, and not for a while. Lately, anthropologists have been experimenting in new nontextual visual, aural, and plastic forms, and in digital pieces combining text, sound, and images (moving and still). Either alone or by collaborating with artists, they have been producing work that acts on the world, uses it, explores it, collaborates with it—in ways that may be evocative and thought provoking, sometimes politically charged, sometimes educational, and sometimes quite beautiful and intriguing to see or hear. Artists, for their part, have since the 1970s adopted materials and practices that may be reminiscent of participant-observation and ethnographic methods (and are often called that), or which may overlap with other anthropological preoccupations or subject matter. (On encounters between art and anthropology, see Schneider and Wright 2006, 2010.)
The Curatorial Collective of “Ethnographic Terminalia,” an exhibition of Art and Anthropology, seeks to promote and encourage crossover works and experiments. ET has taken place as a temporary exhibit in conjunction with the annual AAA meetings in 2009, 2010, and 2011, and will take place again in 2012 in venues outside the convention hall but coordinated in the program through the Society for Visual Anthropology (see Figure 1). After the ﬁrst exhibit, ET had local afﬁliates—Art Spill in New Orleans (2010) and CEREV (Centre for Ethnographic Research in the Aftermath of Violence) in Montreal (2011); the Curatorial Collective also invited known artists to “anchor” the exhibits prior to the call for submissions. And as of the third, the exhibits have themes: “Field, Studio, Lab” in 2011, “Audible Observatories” in 2012. Artist biographies and commentary can be seen on ET’s well-designed and informative website (http://ethnographicterminalia.org)…

… The works in ET will probably never replace textual ethnographies. But the exhibit is a fascinating multidimensional portal through which we can enter and learn about experiments in thought and technology that intrigue, amuse, and may even inspire us to attempt new forms for our own nonfictional works.”