Peter Walsh’s “The Web and the Unassailable Voice” presents an interesting forward-looking view of the web, considering it was written close to 15 years ago.  Walsh describes a plan to encourage discussion about a newly acquired Ashanti seat for the Davis Museum and Cultural Center at Wellesley College across the campus network. “Through the network, students, scholars, and curators will discuss the meaning of the object and the extent to which it was shaped or reinterpreted by European imperialism in Africa” (234). T 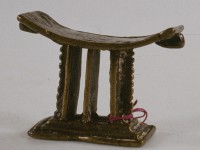 he discussion would then result in a web page detailing the discussion as well as “how best to display the work and explain its meaning” (ibid). Walsh explains that the discussion was in some way inspired by the initial reaction of the African American student community when the Davis Museum was built. The African collection was placed in a smaller gallery, which the students interpreted as a “judgement on the importance of African art relative to Western art….another racially based narrative of exclusion and implied inferiority…a message the museum never intended to communicate” (ibid). Here is the crux of the museum’s problem, in Walsh’s view, that the “unassailable voice” of the museum—typified by the text we encounter on the wall next to an object or artwork—too often misses the mark, and the web offers new ways for the museum to move away from this disembodied voice.

Such a move is, I believe, in accord with Fiona Cameron’s call for better integration of post-structuralist/modernist approaches in museum interpretation. In “Museum Collections, Documentation and Shifting Knowledge Paradigms”, Cameron notes that technology can play a role in presenting multiple interpretations of an object, even though there is still a need, and desire, for interpretation based on “scholarly research” (85). She suggest that a mind map is one way to present different interpretations of an object, allowing for both a scholarly and indigenous description of an object, for instance. I find this compelling, as Cameron notes that most visitors “do not want to take full responsibility for the interpretive process” (85).  That a museum representative would call for polysemic interpretations even when many of her patrons don’t necessarily desire such a move is commendable, but it also presents a challenge. It’s the same challenge Walsh begins with in the opening of his essay. How can the museum move away from the “Unassailable Voice”? Supposedly, in 1997, Walsh was on the way to implement a new use of the web in opening up the interpretive process of cultural objects, by bringing together both scholars and community members to discuss the importance of an object.

A brief search on the Davis Museum’s website and www.archive.org did not turn up any artifacts of such a discussion, which is unfortunate, as I am rather curious to see how sit worked out. With the explosion of social media over recent years and a plethora of media outlets capitalizing on “user generated content” it is sometimes difficult to remind ourselves how novel such an approach was, and still is.  I could not find much community engagement on the Davis Museum’s current website, except for the obligatory Facebook link. Following this, I found mostly announcements about openings and individual pieces of art, as opposed to attempts at fostering dialogue and discussion.

So, in some ways, I think we are still back in 1997. Not technologically, for sure, as it is much easier to integrate discussions across the web due to recent technological transformations. However, I am not so certain that, we, the public, have learned to really engage with museum objects as a site of meaning making—a place where we can all weigh in on an object’s significance alongside of experts and cultural representatives. This is not a technological role, but a cultural role, which as Walsh and Cameron point out, must in some way begin at the museum.

3 Responses to Fostering Dialogue and Discussion