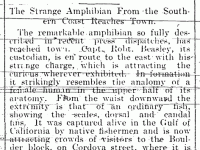 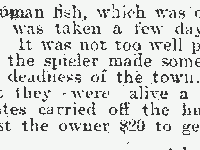 Clifford (1997) mentions “the long history of ‘exotic’ displays in the West. This history provides a context of enduring power imbalance within and against which the contact work of travel, exhibition, and interpretation occurs. An ongoing ideological matrix governs the understanding of ‘primitive’ people in ‘civilized’ places.” (p. 197). He then describes the famous pseudo-exotic performances by CoCo Fusco and Guillermo Gómez-Peña.

When I was collecting data for my M.A. thesis, I found the following newspapers clipping which serve as evidence that the “long history of ‘exotic’ displays in the West” has been part and parcel of everyday life and popular culture too. Not only high-art or museum discourse. I have posted the two 1897 newspaper clippings but since they are a bit hard to read, I also transcribed them below. Enjoy.

The Strange Amphibian From the Southern Coast Reaches Town.

The remarkable amphibian so fully described in recent press dispatches, has reached town. Capt / Robt. Beasley, its custodian, is en route to the east with his strange charge, which is attracting the curious wherever exhibited.  In formation it strikingly resembles the analomy of a female human in the working in the upper half of its anatomy. From the waist downward the extremity is that of an ordinary fish. Showing the scales, dorsal and candal fans. It was captured alive in the Gulf of California by native fisherman and is now attracting crowds of visitors to the Boulder block, on Cordova street, where it is being exhibited.

The human fish, which was on exhibition here, was taken a few days ago to Steveston. It was not too well patronized there and the spieler made some remarks about the deadness of the town. Just to show that they were alive a couple of Stevestonites carried off the human fish and it cost the owner $20 to get it back again.

One Response to The Human Fish : the history of exotic displays…