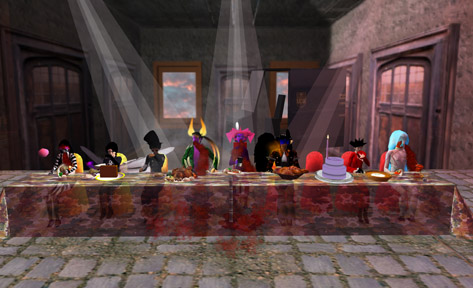 Second Front - "The Last Supper" (2007)- A performance-art group in Second Life. My avatar is located in the middle of the table (pink hair)....

This post deals with Reading Week’s assigned readings which include:

The recurring theme throughout these readings is that virtuality is more of a museal sequence of experiential “encounters” (Muller 2002:296-297) that can be an acceptable surrogate for the (lack of) available “real” museum artifacts.  Since these artifacts are rarely really on display or available to the public anyway (as Muller notes in his Last Supper excursion in MIlan) (Muller 2002:295) and that scholars usually only have access to printed reproductions of artifacts (Bandelli 1999:140-150), the aura has already been sufficient virtualized to become a “real” museum experience.  Muller voices the general public frustration that museums often do not have the sought after artifact on display after advertising it (Muller 2002:295) – as most have gone into databases anyway.  None of these writers feel that this virtualization is a bad thing, per se. Since museums hardly show the original artifact due to physical safety reasons, the virtual surrogate is really all one has to refer to.  It just means that Walt Benjamin was right in forcing the visitor to re-evaluate the relative authenticity of the “original” since we only really have access to the reproduction which may as well be just as real or even more real experientially then original (Muller 2002:298).  I am surprised that none of these authors mentioned Baudrillard’s hyper-real notions of simulacra being more real than real.  The concept of the simulacra is clearly what all of these authors are tacitly referring to.  What I like is how Muller and others acknowledge that the digitization process that most museums engage in is more than a mere reproduction technique (Muller 2002:296). Muller seems to support Levy’s concept of the virtual as being a new synthetic reality rather than as a secondary one subordinate to the “authenticity” of the “real”.

Interestingly, many see museums as a very “real” (rather than synthetically real) civic and sacred space (Muller 2002:297) and so, the museum site in principle, has power as a physical presence. As a result, the museum seems to be the final resting place for the “authentic” (Ibid.). The reason that museums were “trusted cultural institutions” had to do with the myth that the artifacts were “material witnesses” (Ibid). And yet, over the decades, there has been a historical transition from museums being material repositories to becoming immersive story-telling environments (Ibid.).  I recall as a kid in the 1970s and 1980s that the Royal BC Museum was a fantastical story-telling space and the authenticity of the reproductions (such as in the 19th century “old-town”) seemed just as pedagogically potent – if not more so – than merely showing the genuine article in a hermetically sealed glass case. The pleasure of visiting this museum was more than social or a desire to connect with authenticity, it was to be immersed as an agent in a world that represented the past – independent of technological novelty (except for the “Water Wheel” exhibit) (Bandelli 1999:148). To experience the essence of the authentic past “[…] on reflection, seems a chimerical goal” as it always “eludes our grasp by changing its form” (Silberman in Kalay et al 2008:83) and so because of this, I place little value in a true connection with the past when going to a museum. It did not even matter that I had access to the museum’s own direct institutional resources and the benefit of such access (Bandelli 1999:149) would not matter to me in a cyberspace version of the museum either unless I had direct ambitions as a curator.  These spaces are inherently virtual spaces – at least the more successful ones are.  In my opinion and based on my close encounters with the synthetically authentic at the Royal BC Museum, the Disneyfication of museums in general is not an intrusion of museum culture (Muller 2002:303), it helps define the museum as a social space that is equivalent to the narrative and social affordances of pure cyberspace virtual environments (Bandelli 1999:150).

I would like to wrap up this blog post by quickly mentioning how Bandelli believes that the social aspects of a museum experience is thwarted through the virtualization of audio-tours etc (Bendelli 1999:150).  I agree with him as I think one needs to explore an immersive world seamlessly as a free-agent in order to enhance the willing suspension of disbelief (Coleridge 1817). Perhaps when intelligent agents truly become interactive guides and address a net-worked chat channel either with a headset or with ambient spatially-distributed speaker configurations with other participants via augmented overlays (holograms?), will the museum’s virtuality become more social in nature.

5 Responses to Close Encounters of a Virtual Kind