“Ultimately, however, works of art have to be distinguished from the products of other cultural industries that permeate daily life. Often this is a matter of framing, site and presentation as of material, media or imagery” (15).

When reading about transitions in art over time, and especially the aforementioned quote, I thought of Peace Region artist Karl Mattson.  Mattson and his family own a farm outside of Rolla, B.C. not far from Toms Lake where some of the bombing activity took place. He also has oil and gas pipelines and riser sites on/around his families property. In response to the events Mattson created a series of sculptures or Life Pods.

The Life Pod exhibits are sculpture constructed and welded from found objects such as oil and aviation fuel tanks taken from his farm and the surrounding area. According to an article in the Northeast News they are, “…a direct statement in opposition to what he thinks is inadequate emergency response preparedness measures for rural residents in oil and gas industry-affected areas” (2016). The sculpture are aptly named as they are also survival chambers, equipped with oxygen tanks and communication devices. The prototype (the first image below) was made from a diesel-fuel tank that he created for his family.  According to an interview in BorderCrossings (2016) there is enough oxygen for six hours, a radio, an air-raid siren and a beacon, and he installed a hook on the top so that a helicopter can lift the pod to safety.

In other works, Mattson incorporates electronic images, such as in Lost (2015) (which is the featured image) – a sculpture constructed from found objects – of a woman outfitted with oxygen tanks and a communications device, that is alternatively lit on fire, or has digital images projected through and  from her helmet. 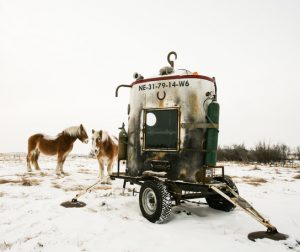 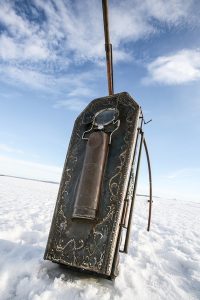 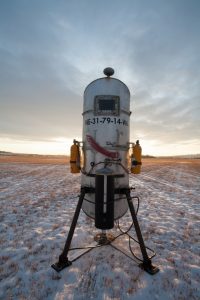 When considering the last few pages of the CTMS chapter, that focused on electronic art, I thought of this event which may be of interest: