For my response paper I visited the New Media Gallery is New Westminster where the exhibit entitled Children by Jean Jacque Rousseau, was on display. The exhibit consists of several spaces where videos play – each consisting of children in some narrative context. The video work by Candice Breitz entitled, The Character, where South African children describe a character in a story, giving their own perspective on the hardships, trials, and thoughts that the character is going through.

In The Matrix Effect, by Christian Jankowski, children re-enact conversations between curators and artists, where the curators are asking sometimes heavy metaphysical questions with the children playing as artists, answering acutely. In The Distance I Can Be From My Son, Lenka Clayton records her three year old son running away from her in various environments (e.g., aisle in a grocery store, back lane) and the camera, with the viewer left waiting to see how long before Lenka runs after him to collect him – and record the distance.

Elisa Giardina Papa entitles her video as need ideas!?! PLZ!!, displaying various adolescent girls stating on YouTube just what exactly they are willing to do in order to gain fame and YouTube likes and followers, with the hopes of eventually having their own popular YouTube channel. In How Did You Come Into This World by Chiharu Shiota, young children (approximately four-to-six years of age) are asked about their memories of being born with interesting results. And finally Here & Elsewhere by Kerry Tribe, a father (who is off camera) interviews his ten year old daughter with questions about time, space, and her perception of their interplay.

While all of these pieces may seem, on the surface, to be completely disparate with only the physical presence of children being the commonality, there were several themes that resonated with me as I walked through the exhibit. The first theme that emerged was contrast. Not just in contrast of perspective or age of children, but contrast in culture. 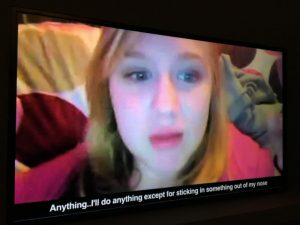 While the first world children of North America are fixated on becoming virtual celebrities and willing to do almost anything with the exception of sticking things in their noses (see figure 1), the children from Africa are focused on describing an unnamed character from an unnamed film and to identify morality and reflect on the human condition. And while we could question Elisa Giardina Papa’s intention and potential bias of implying that first-world children are spoiled and shallow and suggest that we could easily find North American counterparts whose interest in more spiritual and intellectual topics would be just as effortless, we may find ourselves finding it a little more difficult to obtain African children who are as self-centered and materialistic as the YouTubers in need ideas!?! PLZ!!. This is something I believe Jean Jacque Rousseau is wanting to emphasize since the two spaces sit opposite to one another. 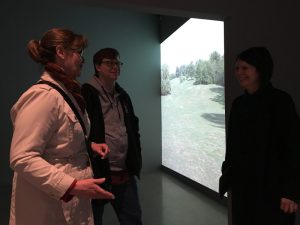 Another theme that I experienced was reflection and nostalgia. I was accompanied by two friends and the curator (Sarah) – all of us being parents of children (see figure 2). As Sarah walked us through the exhibit, we were all drawn to memories of our childhood and how we perceived such things as space, time, how we were born, and stories that were told to us by our parents. We also all reflected on being parents and how we were completely horrified by the shallowness of the YouTube girls and how they were so desperate for attention. We also reflected on the responsibilities of parenthood and cringed when the boy in The Distance I Can Be From My Son was what we all considered to be “too far away” (see figure 3).

Another theme that I feel is worth noting is one of fragility of children and childhood in general. From the children who are acting out artists’ and curators’ conversations as instruments for deeply philosophical statements that they won’t understand for another 10 years, to the YouTube girls who are sadly desperate for attention from complete strangers, to the running three-year-old young boy from Lenka Clayton’s videos, we see vulnerability. Vulnerability that puts us in great power over them where our very own actions may have severe or radically profound consequences – and thus causes us to reflect on ourselves, who we are and what are the consequences of our own actions.

Despite this exhibit simply being several screens of video playing, the narratives that were highlighted in each piece offered much contemplation (at least for me) and I found them closely related with the topics that we’ve covered in IAT 811 where we’ve considered what impact that digital anthropology has had on us and how we project ourselves in this new medium. For me these pieces also captured the classical sense of fine art where they exist as a way of communicating a message. But like Marshall McLuhan’s statement that “the medium is the message”, so too do these children become the medium and the message and so these pieces also have a contemporary flavor to them as well.

One particular topic that we covered in IAT 811 was posthumanism and I found a parallel with posthumanism and the need ideas!?! PLZ!! YouTube videos. The girls, in their desperate attempts at being virtually famous, have detached themselves from the social engagements and interactions that make us a social animal. And what do they desire engagement with? What do they intimately emote with? A computer, a screen, a little tiny black and shiny miniature camera on their laptop or mobile phone. If they become successful with their endeavors, their most intimate interactions will be an anonymous collective of fans that will have no vested interests in their well-being. To me that became a very powerful example of dehumanism.

The need ideas!?! PLZ!! videos also tie in with the Critical Terms for Media Studies book’s chapter Time and Space where terms such as “culture industry” and “industrialized entertainment” are used to describe how some were feeling about the twentieth century art as it quickly changed. I think these terms fit with the videos of the girls since they lack connection with the medium as they race to churn out as many likes as they can on social media.

In Here and Elsewhere by Kerry Tribe, the dialogue with the 10 year old girl and her off-camera father discussing time and space and their interplay sounds very similar to the Dan Graham Present Continuous Past installation mentioned in the Art and Electronic Media book. Graham’s work, which was done in a much technologically simpler time (1974), joined closed-loop video and mirrors where electronic delays were used so as to create “endless regression in space and time”. Same medium and a similar message.

With all of that said, I thoroughly enjoyed this exhibit and would encourage others to experience it as well.