Unawareness interaction: considering the deployment of digital media is a way to augment interactivity in exhibition design

We have an unforgettable tour in surrey art museum last week. Also, we deeply influenced by the artistic atmosphere through the inquiry of three exhibitions: Out of Sight: Eadweard Muybridge and Harold Edgerton, Scott Billings: A Risky Jump, and Zoopraxis: Eadweard Muybridge’s Animal Kingdom. During the process of our journey, I carefully have an observation of exhibit visitor interaction with graphic media and digital media. The practitioners’ behavior and communication give me a lot of inspiring and the first interaction they give to me is unselfconscious interaction.

In the view of a famous Japanese industrial designer, Naoto Fukasawa, his design philosophy is Design Without Thought: “people shouldn’t really have to think about an object when they are using it. Not having to think about it makes the relationship between a person and an object run more smoothly. Finding ideas in people’s spontaneous behavior and realizing these ideas in design is what Without Thought is about”. For instance, this is a mobile phone design by Naoto Fukasawa [1]. His design for the cell phone is inspired by the blunt edges of a peeled potato. His rationale behind the form of the phone is derived from the attachment people have to their phones. By shaping the phone with edges instead of the usual aerodynamic form of a phone, users can feel the textures of the edges while fiddling with their phone.https://www.youtube.com/watch?v=fz7zFoxxEEs&feature=youtu.be

Unselfconscious interaction is a form of interaction with computational artifacts that is animated by incremental engagements that over time lead to subjective and possibly unknowing improvements in the relationships of artifacts, environments, and people [2].

The action of designing and the outcome of such an action that fulfills functional requirements and simultaneously is unaware of any in-context or temporal implications of its properties.

USA national Gallery of Art in Washington embedded transmitters under its floorboards and handed out radio receivers so the electronically inclined could listen to something called LecTour, a recorded guide to the museum’s masterpieces as shown in figure 2 [3].

Figure 2: Wired for art: Visitors sharing an iPod listen to the audio tour

When visitors walk into an exhibition, the audio will automatically play the relevant information about the exhibition. As a result, users can friendly and unawareness interact with the audio thus they even notice. Also, they may get more effective and meaningful information that they could not expect before they step into the museum.

Unawareness interaction with manuals and books

In this case, researchers deploy manuals on a bench first, then they using video to record how visitors reading the manual by themselves without anyone told them in a museum as shown in figure 3. 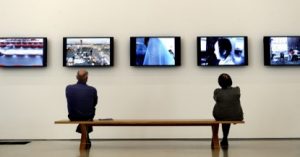 Though the observation of visitors’ kinematic of their reading, most of the visitors will pick up the manuals reading when are immersed in the display shown on the TV or they have their own understanding of the display. Manuals help them better and deeper understanding the connotation that the artist want to express.

This case is the observation when we get together to surrey art gallery last Friday. I still remember that day when the guide invited us to the exhibition with the topic of Out of Sight, some colleagues moved in front of the TV that displays the video about how worker using hammers with slow animation unawareness. They watched the video to have their own understanding of the exhibition while they listen to the explanation of the guide.

Three cases give us an insight view of the understanding of what the unwariness interaction is in exhibition design and how it augments the interactivity between the display and stockholders. Indeed, visitors always unawareness interact with the digital media through the process of visiting with reflection and reaction over time.

In the case of manuals and booklets, visitors can easily get the relevant materials immediately, they even not notice that they find a manual that tells the same story with the display. At first, they just set on the bench to watch the TV to experience the art. After they immerse into the artistic atmosphere they may put their hands on the manual unawareness. Also, some visitors may have a glimpse of the surroundings, they also see the manual that just on the right side of their body. Each of these findings suggests interesting spaces for designers to explore in the future when considering metrics to accessibility in valued digital media deployment.

In the case of interaction with audio, the case has also highlighted how accuracy the LecTour system broadcast the relevant information of display to support the inquiry of art by visitors. Spread audio enabled visitors to better incorporate digital information of the historical artifacts into their observation seamlessly.

In the case of interaction with video, when visitors listened to the interpretation of the guide while they have a macroscopically understanding of what the Out of Sight is, they step into the front the TV and deeply involved in the video unawareness. Indeed, they can evaluate and analysis the digital picture in the TV and guider’s voice together to help them have an insight percent towards their own way.

In conclusion, the qualitative findings from the study case support the argument that unawareness interaction can augment the interactively for visitors in HCI research. Also, the visiting experience of visitors can also be improved through the design of the exhibition. In addition, the findings support the deployment of digital media system and especially in the TUI and embodied interaction in designing exhibition for visitors.