Mass media play a key role to transfer information to the general public through text, visual and video effects (P266-272). However, John Durham Peters argued that “mass media have lacked the ability to speak to people as individuals or to tailor the speech to the context of its reception. They produce standardized rather than customized communication, designing content by guesswork and probability” (P268). As the media development, it comes to the “we media” age that we can act either as receiver or producer. But my question is that why we media can develop so fast to the extent that it is going to fuse mass media as well as replace mass media?

I can put forward three reasons to answer this question. The first reason is that we media can provide seamlessly update information in real time and real space. for instance, I can use WeChat (an app that provides a platform for any private people or organization to provide and receive information) to get what is the newest interaction research information at any time if I want. As a result, I do not need to spend a specific time to pay attention to the mass media to get a lot of messy information in this overloaded information age. The second reason is that we media can provide “private-ordering” information. you may see the figure 1, not only private people but also mass media itself has an official account on the WeChat platform to provide the information which can be booked by the general public as what they want through mobile technology. 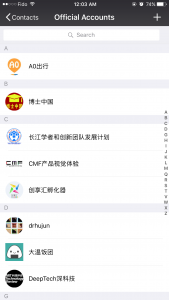 The third reason is that we media provide timely interactivity to everyone in their everyday activities. People can interact with the mass media through the official account by input information or through voice communication. This technology takes both benefits to relevant stakeholders. The gap between receivers and providers become vague.