Skip to content
When John Durham Peters talks us through the different forms of address, availability and access in the chapter Mass Media he brings up the examples of religion and the Church in multiple instances. He talks, for example, about how Buddhist, Christian and Muslim evangelists, by delivering a more or less unified message to vast numbers, served as mass media and later positions the church as a network with many stations; Sunday morning was the time, the Bible the program.

What I found especially interesting in this argument is how Peters draws parallels between these forms of mass media and the shape it may com in today.

“Perhaps even more, it [the internet] recreates the much older logic of pilgrimage, a mass audience that grows over time, assembling one by one at a particle rist at its own speed and for its own purposes. The pilgrim – at Mecca, Lenin’s tomb or Google – interacts personally with a site that si designed to accommodate many, knowing perhaps that millions have gone before and millions will come after. “

This comes back to the argument of “the Cathedral of Computation”, in which the author proposes us an exercise: “the next time you hear someone talking about algorithms, replace the term with ‘God’ and ask yourself if the meaning changes.”

This all lead me to the project Google Prophecy by Anastasia Kubrak: a modern forecasting service that generates your personal metaphysical advice by reading your palm. It predicts your future by printing the autocomplete searches from google. The project was inspired by how google has taken a role that was previously filled by religion.

Another interesting blending of religion and google I came across this week is the use of google maps to communicate existing eruvs. An eruv is a spiritual boundary that exists as a virtual wall. The Jewish Sabbath prohibits performing work, including moving an item between a private and a public place. As you might imagine, this gets quite complicated if you want to accomplish… well, anything (however, wasn’t that the whole point?).

An eruv is a thin line, usually fish wire, running through the poles in the streets, creating an area in which you don’t have to abide these rules.

“An eruv is a sort of “virtual wall” that encompasses an area in order to create a “private area”, for the purpose of being permitted to carry things within that space on Shabbat (carrying is forbidden on Shabbat in public areas). The “walls” of the eruv are made up almost entirely of Hydro-electrical poles and the wires that connect them. In a few places, walls and fences are used as well.” – Vancouver Eruv 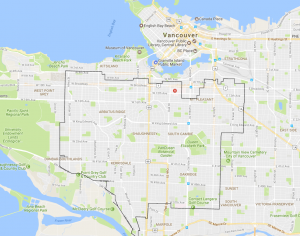